I have just finished entering the VIN number onto the state of Connecticut’s Form H-13; otherwise known as the OFFICIAL REGISTRATION OF A MOTOR VEHICLE AND APPLICATION FOR CERTIFICATE OF TITLE. You have to bold it like that. It’s a state thing. Makes it seem intimidating and important I suppose. Completing the form is bittersweet. It is one more piece of an eight-month puzzle that is leading up to my ride from Connecticut down to North Carolina to attend this year’s RoadRUNNER Touring Weekend in Maggie Valley.

On June 28th I will hop on a plane to Connecticut and pair form H-13 with a dusty, coffee stained title sitting on a desk in Bolton, CT. The next morning I will head into the Department of Motor Vehicles. I will walk up to an agent (after what I assume will be a reasonably long wait, as my business is very important to them).

4)    A certified copy of the probate letter that will make the bike officially mine . . . Check!

When I leave the DMV, I will be the proud, but conflicted, owner of a 2008 Kawasaki KLR.

For this part of the story I have to go back to 2007 when I introduced my dad to the dual sport KLR. I bought one for him to ride in Colorado. It was the first bike he rode off-road (successfully). That ride eventually ended up as my very first RoadRUNNER article. After the ride, he went home to Connecticut and immediately went to Enfield Motor Sports to get a closer look at the KLR.

Now, to my knowledge there was no meteoric activity reported in the area, no eclipse or abnormal magnetic field, but what happened next defies rational explanation.

As the story goes, my dad turned to his wife, Helena, pointed to a blue KLR and said, “What do you think of that one?” She casually answered, “I like it.” You see, those of us close to my dad had grown accustomed to him “shopping” without purchasing. But then something unexpected happened. My dad uttered the words, “I’ll take it!” 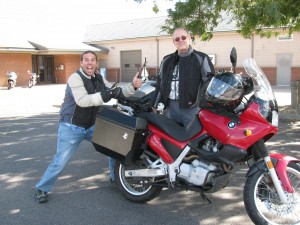 A ripple went through the universe . . . unnoticed by most, but I felt it from thousands of miles away, even before my phone rang and the premonition was confirmed. Until this point, no one had ever witnessed my dad buy anything new before. Ever! Just like that, he ceased spending nights and weekends working on the multitude of motorcycles inside and outside of his house. Instead he began to ride the KLR every day. In 28-degree weather he could be seen smiling as he rode to work wearing long underwear circa 1959 to stay warm. (Okay, they may have been new at some point.)

For the next five years I would hear the stories of my dad’s rides around Hartford. From Colorado I would work to plan our yearly epic adventures. Over the years, we would ride all over Colorado, Wyoming, Utah, Nevada, and more. But on October 21, 2012 another ripple went through the universe. My phone rang again. This time the news dropped me to my knees. My dad was heading home from the grocery store, on his BMW Funduro, when a car pulled out in front of him. The car won.

This year will be the first time in over five years that I will plan and take an epic ride without my dad. I have chosen to ride his KLR in honor of him. Since I am in Colorado, the folks at Enfield Motor Sports, the very place my dad bought his first new motorcycle ever, have been meticulously preparing his bike for my ride. When I head to Maggie Valley my dad may not be riding behind me, but he will be with me. So if you see a Kawasaki KLR with an old Morgan Convertible horn mounted to its side, you’ll know it’s us.
Beep beep’m beep beep yeah!

The bottle of water at the DMV?  I’m glad you asked. I once learned that you cannot drink and cry at the same time. So I keep it with me when I am faced with sharing the news of my dad’s passing. It should be noted that this also works with a tasty single malt, but, as my dad was 26 years sober, I think I will stick to water for now.

Cheers Dad. I love you. Happy Father’s Day—let’s get ready to ride!

Originally Published in RoadRUNNER Magazine as Ride to Live. Live to Ride. Keep on Riding!Click here to read this and other posts on my official Adventure Hermit Column at RoadRunner.travel